“Why do I have to go to church?” I was feeling cranky, and my six-year-old self wasn’t having it. 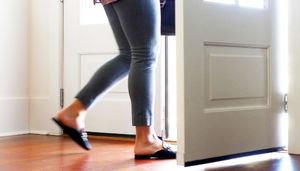 “Because I’m your mother, and I say so.” My mother wasn’t having it either. End of discussion.

Sometime later, we had a similar dispute about my need to finish the now-cold lima beans on my dinner plate. Same question, same answer. “Because I’m your mother, and I say so.”

When people ask us why it is necessary to dismiss the catechumens from the liturgy, I’m tempted to give the response I learned in my childhood: “Because the church is our mother, and she says so.” But what I knew, even at six-years-old, was that there was a “hierarchy of truths” in our family. It was much more important for me to go to church than it was to eat lima beans.

So our issue with dismissing catechumens is this. Is it a “going to church” kind of rule or “eating lima beans” kind of rule? Just how crucial is it? To answer that, let’s look at three reasons the church tells us we have to dismiss the catechumens.

Least compelling reason: Because the church says so

I wasn’t really satisfied with my mother’s “because I say so” response. None of us likes to be required to do something from a higher authority, especially if we don’t understand the reason behind the requirement.

Even so, we shouldn’t dismiss this reason too quickly. Respect for and obedience to authority is an important teaching of the church. And one of the highest levels of authority in the church is the liturgy itself. The Catechism of the Catholic Church says:

The law of prayer is the law of faith: the Church believes as she prays. Liturgy is a constitutive element of the holy and living Tradition.

For this reason no sacramental rite may be modified or manipulated at the will of the minister or the community. Even the supreme authority in the Church may not change the liturgy arbitrarily, but only in the obedience of faith and with religious respect for the mystery of the liturgy. (1125-1126)

If we are going to teach the catechumens to have “the obedience of faith” and “respect for the mystery of the liturgy,” we have to set a good example by following the rules of the liturgy that the church gives us.

If we are going to teach the catechumens to have “the obedience of faith” and “respect for the mystery of the liturgy,” we have to set a good example by following the rules of the liturgy that the church gives us.

More compelling reason: The dismissal teaches us about holy order

Even beginning catechumens quickly come to learn that we believe everyone in the church is part of the One Body of Christ. We are constantly emphasizing our unity not only with everyone in our parish, but with everyone in all the other parishes of the diocese, all Christians across the world, and even all those who have gone before us in faith.

But that core emphasis on the unity of the one body does not do away with diversity. At the same time we teach and uphold unity, we also celebrate the diversity of gifts that the Spirit gives to each of us individually.

So how do we function as one body if we are all diverse? Our diversity is “ordered.” Each of us has a role to play in the way the one body functions. Some officially recognized orders in the church include:

When we publicly dismiss the catechumens from the liturgy, they become a liturgical symbol that teaches them and us about the way the church is ordered and the distinct roles of the various orders.

The dismissal becomes a “teachable moment” at which those of us in the Order of the Faithful (“the priestly people”) are reminded we have a crucial role to play in the liturgy. That is, our participation is required to offer the sacrifice of praise. “Sacrifice” is a priestly obligation, and we, the priestly people led by the ministerial priesthood, are required to carry out that obligation.

Those in the Order of Catechumens have a different obligation. The church teaches that the catechumens “are fed by the Church with the word of God and the aid of the liturgy. For their part, they should have the desire to participate in the Liturgy of the Word and receive Blessings and Sacramentals” (OCIA 47).

The catechumens are “consecrated” for this role in the one body at the rite of Acceptance into the Order of Catechumens (also called the Rite for Entrance into the Catechumenate in the new translation):

If, then, you wish to become his disciples
and members of the Church,
you must be led into the whole truth
that he has revealed to us:
learn to make the mind of Christ Jesus your own,
strive to model your life on the teachings of the Gospel,
and so, love the Lord your God and your neighbor
as Christ commanded and showed us. (OCIA 52a; emphasis added)

To make this actually happen, the rubrics of the liturgy say:

[The catechumens] must normally be gently dismissed before the Eucharistic Celebration begins for they ought to wait for Baptism, by which they will be incorporated into the priestly people and deputed to participate in the new worship of Christ. (OCIA 75.3)

The most compelling reason for dismissing the catechumens from the liturgy is that it enables them to do the thing they are required to do as catechumens.

Most compelling reason: The dismissal trains the catechumens in their number one job

The most compelling reason for dismissing the catechumens from the liturgy is that it enables them to do the thing they are required to do as catechumens.

One thing we have to remember is that everyone is dismissed from the liturgy. The priestly people are dismissed after we have offered the sacrifice of praise in order to do our number-one job: “Go and announce the Gospel of the Lord” (Roman Missal, “Blessing and Dismissal”).

The catechumens are dismissed before the sacrifice of praise is offered “to share their joy and their spiritual experience” (OCIA 67a). The liturgical act of the dismissal and the subsequent mystagogical reflection on what God revealed to them in the gospel (and the other scriptures) is the number-one obligation of those who are in the Order of Catechumens.

This joyful sharing is not a formal catechetical session. It is not Bible study or teaching as in a classroom or study group. It is a continuation of the Liturgy of the Word, during which the catechumens focus on the joy that God’s word has given them.

This ongoing spiritual (mystagogical) reflection on God’s word is what prepares the catechumens to become members of the priestly people.

The ongoing spiritual (mystagogical) reflection on God’s word is what prepares the catechumens to become members of the priestly people.

My mom knew the difference between requiring me to go to church and eating lima beans. She eventually gave up on the lima beans, but she never let up on the Sunday obligation. We have to have a similar understanding of the rules we ask the catechumens to follow. Some are more important than others.

When it comes to the dismissal of the catechumens from the liturgy, this is not a lima bean rule. This is serious business, and we need to practice “the obedience of faith” and have “respect for the mystery of the liturgy.”