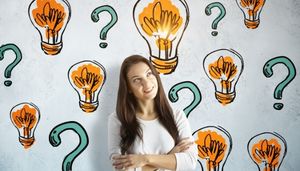 Almost, but not quite yet. The United States bishops have approved a close-to-final translation of the Rite of Christian Initiation of Adults, and we are waiting on confirmation from Rome. So it’s not yet finished, but will be soon.

Well, in church years, “soon” could mean several years. The best estimate right now is that we might have a printed text in late 2023. But don’t toss your current copy of the Rite of Christian Initiation of Adults in the recycling bin just yet. Rome could ask for changes, which could delay the final version.

3. Why? Why do we need a new translation?

Translation of any language into another is governed by a set of principles. And principles differ, depending on who is doing the translating. Ask any Spanish speaker if the English word “car” should be said in Spanish as “carro,” “coche,” or “automóvil,” and you start to get a sense of this.

In 2001, Pope John Paul II issued a new set of guidelines or principles for the translation of ritual books from Latin into other languages. Most of us remember some of the dramatic changes in some of the texts of the Mass (e.g. “And with your Spirit”), which were based on these new principles of translation.

Not exactly, but a lot of people think so. The title of the rite in Latin is: Ordo Initiationis Christianae Adultorum. That has always been the title in Latin, and that is not changing. When the initiation rite was first translated into English in 1972, it was translated as: Rite of Christian Initiation of Adults.

However, the new title of the initiation rites will most definitely not be “OCIA.” That’s an abbreviation, not a title. We got into a bad habit of calling the Rite of Christian Initiation of Adults “RCIA.” And we should take this opportunity to stop using the abbreviation.

If you want to know more about why we feel strongly about this, click here.

5. What is changing besides the title?

The text of the main introduction, the introductory texts to each rite, the rubrics, parts the presider speaks, the responses, and the prayers are all being retranslated from the Latin original into new English texts.

We got into a bad habit of calling the Rite of Christian Initiation of Adults “RCIA.” And we should take this opportunity to stop using the abbreviation.

7. What is not changing?

The focus on the kerygma and the journey of faith (RCIA 1), the steps and stages of the catechumenate (RCIA 6-7), the six core principles of adult initiation (RCIA 4-5), the central role of the parish community in the initiation process (RCIA 9), and the four areas of training in Christian life (RCIA 75) are all remaining the same.

8. What are all those numbers?

Those are paragraph numbers. All ritual books have numbered paragraphs for easy reference. In the first translation of the Rite of Christian Initiation of Adults, the paragraphs of the Latin original were reorganized to make things clearer for English readers (and Spanish readers in the United States).

Fortunately, the new translation approved by the U.S. bishops, but not yet confirmed by Rome, retains the reordered paragraph numbers that we are all used to.

Note that in other English-speaking countries, the paragraphs are also reorganized, but not to the same extent. So the words are the same but might appear in different places in a U.S. edition versus a Canadian or Australian edition.

9. What about the rites for baptized candidates?

Most of the people in our catechumenate processes are not actually catechumens. They are baptized Christians. The original Latin rite is concerned only with unbaptized seekers who are becoming Christian. The rites for baptized candidates have been composed by and added by the bishops of the English-speaking countries (and by the U.S. bishops for U.S. Spanish-speakers).

These rites for the baptized vary from country to country, and they were originally composed in English. So there is no “new translation.” They remain the same, at least in the United States. Still, these additions to the core text need to be reconfirmed by Rome.

10. I heard about something called the “National Statutes for the Catechumenate.” What is that?

In the appendix of the Rite of Christian Initiation of Adults are statutes governing how to implement the adult initiation rites. These apply only to the church in the United States, but they are helpful guidelines for any country or region. In the Order of Christian Initiation of Adults, the statutes are being reduced and simplified. And these also need to be confirmed by Rome.

11. Are there other changes we should know about?

The same is true with the ritual texts for confirmation, which currently don’t match, but will soon.

12. How do we get ready for this change?

The best way to prepare is to refresh your understanding of the core principles of the initiation rites and assess how well your parish is implementing those principles. TeamRCIA will be hosting a series of free online trainings in 2022 to help you with that. Make sure you are getting our weekly newsletter to be notified about upcoming events. Click here to get onto the mailing list.

What questions do you have about the upcoming change? What does your parish need to know? Share your thoughts in the comments below.

Photo by Peshkova from Getty Images.