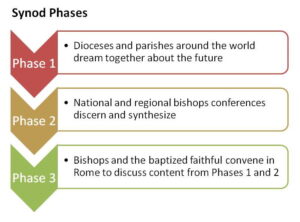 In previous posts, we’ve looked at the upcoming dreaming together process that Pope Francis has called for. But what exactly is the process?

Officially the process is called a synod, which literally means walking together or dreaming together. They church has always had “synods,” even if they weren’t called by that name. The first synodal process is recorded in Acts of the Apostles, which is the story of how the church first learned to walk and dream together.

Continuing the spirit of Vatican II

Following the Second Vatican Council, Pope Paul VI revised and formalized the synodal process for the modern era. His goal was to continue the spirit of Vatican II by occasionally gathering representative bishops from around the world to consult with him on important matters.

Pope Francis has taken Pope Paul’s reform one step—one giant step—further. Instead of consulting with just the bishops, Pope Francis is consulting with the entire church. And when he says “church,” he doesn’t just mean people who go to church. The official handbook for the synod says:

For this reason, while all the baptized are specifically called to take part in the Synodal Process, no one—no matter their religious affiliation—should be excluded from sharing their perspective and experiences, insofar as they want to help the Church on her synodal journey of seeking what is good and true. This is especially true of those who are most vulnerable or marginalized. (Synod Official Handbook)

This dreaming together process (or synodal process) will take place over three years. And there will be three phases:

On paper (or on a computer screen) this can all look like an elaborate set of meetings on how to have meetings. But that is definitely not what is going on here. Pope Francis has said clearly that he wants to invert the pyramidal structure of the church. By inaugurating this dreaming together process that involves the entire church, Pope Francis is extending the reforms of the Second Vatican Council into the generations of the future.

The most important thing for catechumenate teams to know is that participating in the synodal process matters.

It matters because this process is about conversion, which is at the core of what we teach in the catechumenate. By engaging in the dreaming together process that Pope Francis is calling for, we will be doing our part to invert the pyramid. We will be doing our part to change our own way of doing things to discern more closely the will of the Holy Spirit. The official handbook tells us:

This kind of discernment is not only a one-time exercise, but ultimately a way of life, grounded in Christ, following the lead of the Holy Spirit…. (Synod Official Handbook)

Ultimately, if we engage in this process, our seekers will learn to live a life of discernment, grounded in Christ, following the lead of the Holy Spirit. That’s exactly the job we signed up for when we said yes to this ministry.

In a future post, we will look at how catechumenate communities can engage in this dreaming together process.

How is your parish preparing for involvement in this process? How are you conveying the importance of participation to your team? Share your thoughts in the comments below.